The majority of animals adopted from MHS go on to be loved family pets, which is exactly where we want them to be! But some of our adoptable animals have a little something “extra” that makes them ideal for placement in a home where they will have a job. One of those animals is Bayne. Bayne was adopted from MHS as a puppy to be raised as a service dog for his owner, Tina. 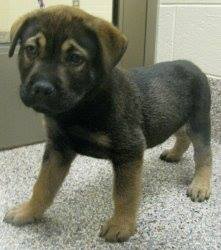 Bayne as a puppy.

Service dogs go through rigorous training – first to be able to function in public with exemplary behavior, and also to learn particular tasks to help their owner. Service dogs can be used for a variety of disabilities, including people who are blind, deaf, diabetic, or have conditions like seizures, PTSD, or mobility limitations. Bayne helps his handler by picking up dropped items, opening and closing doors and assisting her up and down stairs.

Dogs like Bayne are great examples of the amazing things that shelter dogs can do. We have had multiple dogs go on to be service dogs, in addition to some that are therapy dogs, search and rescue dogs and dogs who do performance sports like obedience or agility.