A Note from Matthew Pepper on “Vigilante Animal Rescue”

I have spent my entire professional career in animal welfare, but I haven’t always been behind a desk.

Fighting animal cruelty has always been my passion. I have personally seen the worst things that people are capable of doing to an animal, as well as the best of humanity when hope, love and a second chance are given to the victims of cruelty and neglect.

Recently, I found myself chatting with filmmaker Tom McPhee. Our conversation gravitated to Hurricane Katrina – and the devastating aftermath to which we both responded, but in different capacities. I was there to assist the Humane Society of Louisiana, and he was there to document the events as they unfolded. It was truly a life-changing experience, and in many ways, it was also career affirming – this was what I was meant to do.

There was such an overwhelming need during Hurricane Katrina, and the subsequent emergency response to that need was incredible. People left their jobs, homes and families, for weeks and even months, risking their health and safety, all for the cause – to make a difference, to save animal lives. It was almost as if the relatively small, close-knit family that was animal welfare grew tenfold overnight.

In a disaster situation, there is so much adrenaline, and so much immediate need, that you find yourself jumping from one thing to another before you even have time to think much about it. Every minute of every day is an emergency. There is constant need, energy and direction.

But where did that energy go when it was time to turn home?

In the aftermath of Hurricane Katrina, the world of animal welfare saw an explosion of volunteer organizations striving to keep that energy alive in their own communities. Small volunteer-based organizations, once practically non-existent, became commonplace. This incredible influx of passion and energy was great for animal welfare, but was not without its significant challenges. The field of animal welfare is emotionally exhausting, physically demanding, and requires both the passion in our hearts as well as discipline in our heads. As these organizations began to appear in our communities, we gradually saw a divergence into two categories: those that evolved into professional organizations, and those that went down the path of “vigilante animal rescue”.

Oftentimes, perception is confused with reality, and it is no different in animal welfare. The problem is that the general public perceives all animal welfare groups to be the same – yet we are not. Furthermore, social media has blurred the lines between appropriate and inappropriate animal rescue – and quite frankly, between legal and illegal. It is easy to read a Facebook post about an organization that takes an animal from a backyard, perhaps because they believed another was not taking action, and consider those actions heroic. However, we must consider the moral and legal foundation that decision was based upon and its subsequent impact on all of animal welfare.

Across the country and right here in Michigan, you have many organizations taking possession of animals that they perceive are in need, when they do not have the proper authority or training to do so. When these unauthorized, untrained groups illegally seize animals, problems can quickly arise. And sometimes, all it takes for an animal to be provided proper care is having a straightforward conversation with the owner, perhaps providing them with some resources and making sure they understand the seriousness of their pet’s conditions. When an animal is simply removed from the owner in an unlawful way, this does nothing for the next dog that owner will have.

Furthermore, some groups fail to complete the legal process when they seize an animal and, as part of that, fail to rule out potential medical causes or external factors that would be paramount in any sound criminal case. This creates several significant problems. The act itself is likely against the law, but most concerning is that acting in this way could discredit any case against an identified owner. This would provide potential animal abusers the opportunity to return to their ways and put their current, and future, animals at risk. Finally, when a group acts illegally, it puts them in danger of not being able to continue their much-needed work. Acting illegally opens doors for loss of authority, credibility and trust. It leaves the group with little respect and the potential for legal ramifications that could prevent them from continuing to save animal lives.

At the Michigan Humane Society, our animal cruelty investigators are extensively and professionally trained in investigating animal cruelty. They are bound by our mission and their profession to always act in the best interest of the animals while also acting within the law. This can at times, however, create a misunderstanding for those who, like MHS, are deeply passionate about animals. 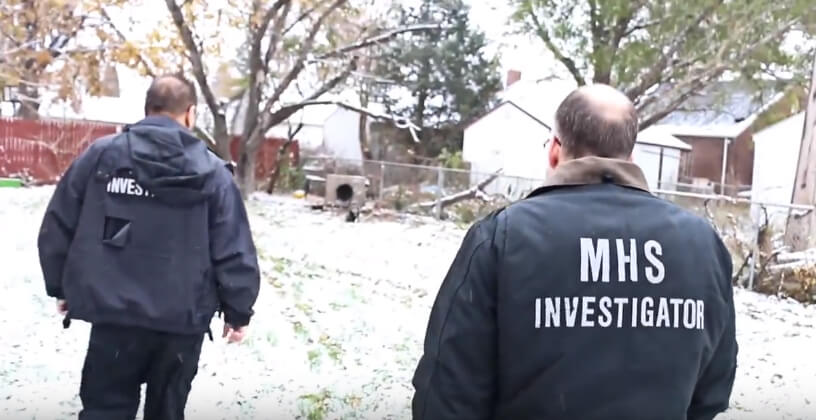 Here is an example: A dog is being kept outdoors and on a chain. Let’s put aside, for the sake of discussion, our opinions and how anyone could believe that this is a compassionate and appropriate way to care for an animal. Legally, outside of extenuating circumstances, if the dog is provided proper shelter, food and water and appears in good health and weight, the animal cannot simply be taken just because it is being kept outdoors; even if the dog is not provided these basic essentials, in the absence of immediate danger to the animal, it still cannot simply be removed absent due process. What can be done, then, if an animal has less than proper, legally-required provisions? We take this opportunity to educate the owner, leave notifications, provide additional provisions for the animal (food, straw, a doghouse) and schedule check-back visits to ensure that proper care, as dictated by law, is provided. At its core our investigators are trained to educate first and enforce second. If improper care persists, our cruelty investigators then have the authority, as dictated by the City of Detroit, to remove the animal from this situation and work with local prosecutors on any applicable charges. We are adamant about scheduling check-up visits and thoroughly documenting what we witness, because if we do end up removing an animal, we are able to have the owner’s consistent behavior documented – a piece of evidence crucial to prosecuting anyone who puts an animal in harm’s way.

As you can imagine, these types of situations are incredibly frustrating for us at MHS, just as they are for you. MHS field services staff are on the streets 365 days a year. MHS will go to any lengths we legally can to help an animal in need. However, the instant we step outside the law, we compromise our extensive outreach and field programs, putting tens of thousands of animals at risk. The moment we act illegally, we put our credibility and authority in peril. The consequences of this would undermine our ability to successfully prosecute our current and future animal cruelty cases, all of our records would fall into jeopardy, as well as our ability to work with all entities for the good of animals in need. Because of this, we will continue to fight for these animals while ensuring our team of cruelty investigators and rescue team members are extensively trained with the tools to act within the law – enabling us to continue to operate and respond to the 10,000-plus cruelty complaints and emergency rescue calls we receive each year.

In the absence of serious and immediate danger, no one can just leap into a backyard and take an animal. Doing so is the equivalent of stealing, regardless of the motives, and is robbing that animal from an opportunity at true justice while undermining the processes in place that make animal welfare a true profession. Even the authority of Detroit Animal Control officers to enter a home or yard without a warrant, in cases of local ordinance issues, is being challenged by a group of dog-owning residents. If we do not think the system in place to protect animals is effective, then we must collectively work to improve the system – not subvert it.

I have roughly 20 years’ experience in animal welfare, and I am an animal control officer in two states, including Michigan. I have worked countless complex cases of animal cruelty and taught police officers in four states in the area of basic animal control principles and animal cruelty investigations. From experience, I can say that it is hard to see an animal at the end of a chain and say, “I’ll be back for you.” It is hard to not react instinctively with the suffering you see. Anyone who commits their time and efforts towards animal welfare has my respect. However, that compassion and commitment must exist within the context of laws that exist to protect us all, or we undermine the very principles we claim to uphold.